The University of Hong Kong (HKU) 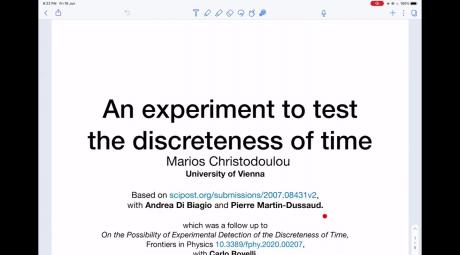 An experiment to detect the Discreteness of time

Marios Christodoulou The University of Hong Kong (HKU)
June 18, 2021
To this date no empirical evidence contradicts general relativity. In particular, there is no experimental proof a quantum theory of gravity is needed. Surprisingly, it appears likely that the first such evidence would come from experiments that involve non relativistic matter and extremely weak gravitational fields. The conceptual key for this is the Planck mass, a mesoscopic mass scale, and how it relates with what remains of general relativity in the Newtonian limit: time dilation.