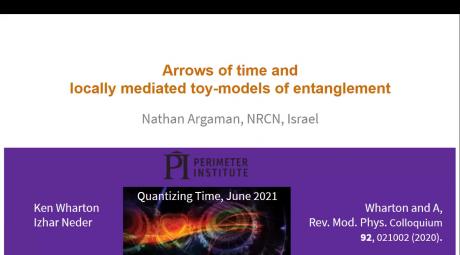 Arrows of time and locally mediated toy-models of entanglement

Nathan Argaman
June 18, 2021
"Making progress in quantum gravity requires resolving possible tensions between quantum mechanics and relativity.  One such tension is revealed by Bell's Theorem, but this relies on relativistic Local Causality, not merely the time-reversal symmetric aspects of relativity.  Specifically, it depends on an arrow-of-time condition, taken for granted by Bell, which we call No Future-Input Dependence.  One may replace this condition by the weaker Signal Causality arrow-of-time requirement -- only the latter is necessary, both for empirical viability and in order to avoid paradoxical causal loops. 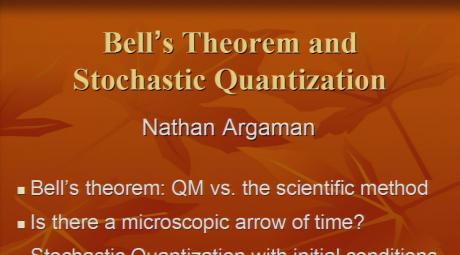 Nathan Argaman
November 22, 2006
Most modern discussions of Bell's theorem take microscopic causality (the arrow of time) for granted, and raise serious doubts concerning realism and/or relativity. Alternatively, one may allow a weak form of backwards-in-time causation, by considering "causes" to have not only "effects" at later times but also "influences" at earlier times. These "influences" generate the correlations of quantum entanglement, but do not enable information to be transmitted to the past. Can one realize this scenario in a mathematical model?