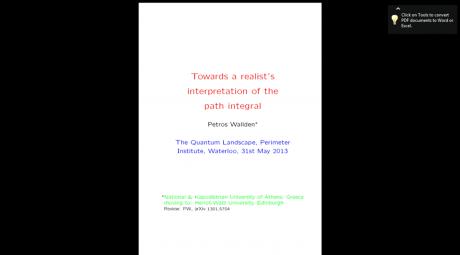 Towards a realist's interpretation of the path integral

Petros Wallden University of Athens
May 31, 2013
Having a fundamental spacetime view of physics, appears more justified in attempting to construct a quantum theory of gravity. In this talk, motivated by the latter,  a path integral approach is adopted and an attempt to construct a self-consistent realistic histories formulation of quantum theory is presented. After revising the histories viewpoint of classical physics, the quantum case is considered. However, the nature of the probabilities arising from the path integral, leads us to alter the classical picture. 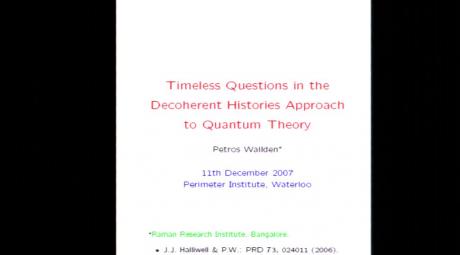 Timeless Questions in the Decoherent Histories Approach to Quantum Theory

Petros Wallden University of Athens
December 11, 2007
In any attempt to construct a Quantum Theory of Gravity, one has to deal with the fact that Time in Quantum Mechanics appears to be very different from Time in General Relativity. This is the famous (or actually notorious!) \"Problem of Time\", and gives rise to both conceptual and technical problems. The decoherent histories approach to quantum theory, is an alternative formulation of quantum theory specially designed to deal with closed (no-external observer or environment) systems.