Scott Tremaine is a world-renowned astrophysicist who is currently Chair of the Department of Astrophysical Sciences at Princeton University. Professor Tremaine's research is mostly directed toward understanding the dynamics of a broad range of astrophysical systems, including protoplanetary disks, planetary rings, planetary systems, comets, globular clusters, galaxies, and clusters of galaxies. He has been a long-time participant in a large collaboration that investigates - using the Hubble Space Telescope - the properties of massive black holes in the centres of inactive nearby galaxies; the group has made a number of important discoveries. He has studied a wide variety of astrophysical phenomena, from the properties of extra-solar planets to binary super massive black holes that can form when galaxies collide. Professor Tremaine is Imasco Fellow of the Canadian Institute for Advanced Research (CIFAR) and Director of CIFAR's Cosmology and Gravity Program. He was a long-term member at the Institute for Advanced Study in Princeton and has been Director of the Canadian Institute for Theoretical Astrophysics (CITA) in Toronto. His seminal contributions to solar system and galactic dynamics, e.g., his prediction that the rings around Uranus were being held in place by "shepherding" moons (discovered years later by the Voyager 2 spacecraft mission), won him the rare distinction of having an asteroid named after him. He was also awarded the 1997 Dannie Heineman Prize for Astrophysics, a major international award. 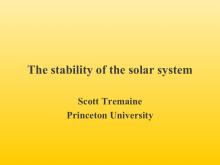 The Stability of the Solar System