I've worked for quite some while on black hole physics, Hawking evaporation, and more generally particle production in General Relativity. The black hole evaporation provides an interesting signature in scenarios with Large Extra Dimensions, where these mini black holes can be produced on the LHC. More generally, I am interested in the interplay between General Relativity and Quantum Field Theory, all the puzzles of quantum gravity, or quantization. In particular I have been working since 2003 on a model that takes the idea that the Planck length is a fundamentally finite length seriously, and incorporates this feature into quantum field theories. This turned out to be closely related with 'deformed' versions of special relativity. 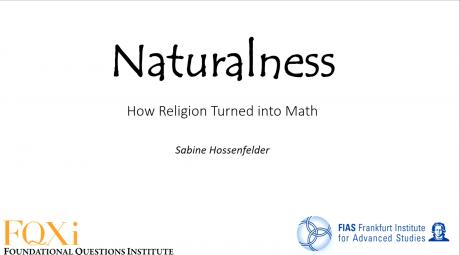 Naturalness - How Religion Turned into Math

Naturalness arguments have been extremely influential in the foundations of physics during the last decades. I explain why they are based on faulty reasoning. 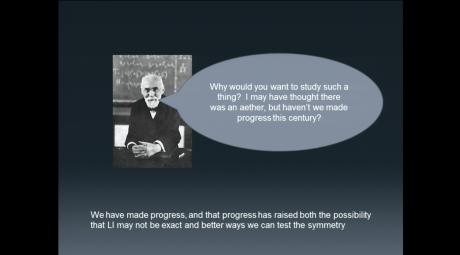 October 24, 2012
Is aether technically natural?
I will discuss whether higher energy Lorentz violation should be considered a natural expectation in theories of quantum gravity with a preferred frame.
_____________________________

Quantum superpositions of the speed of light 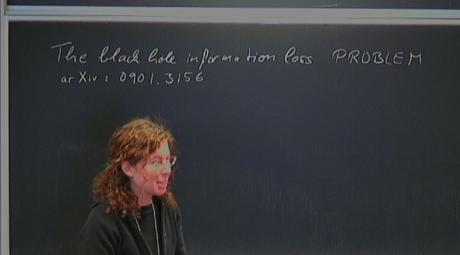 Sabine Hossenfelder Frankfurt Institute for Advanced Studies (FIAS)
January 24, 2009
I will classify the options to solve the black hole information loss problem by how radical a departure from semi-classical gravity they require outside the quantum gravitational regime. I will argue that the most plausible and conservative conclusion is that the problem of information loss originates in the presence of the singularity and that thus effort should be focused on understanding its avoidance. A consequence of accepting the accuracy of the semi-classical approximation is the surface interpretation of black hole entropy. 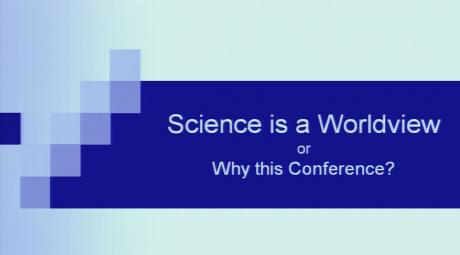 Introduction: Science in the 21st Century 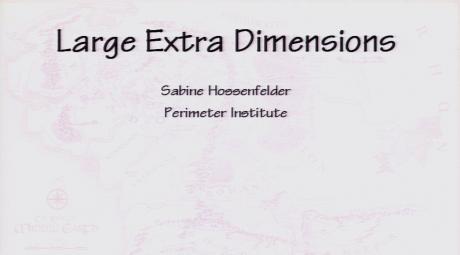 Sabine Hossenfelder Frankfurt Institute for Advanced Studies (FIAS)
August 23, 2007
It is an open question why gravity is so much weaker than the other three interactions we know. One possible answer which has been suggested is that this mismatch is only apparently so, and a feature we observe on large distances. The strength of gravity on small distances could grow faster than an extrapolation of Newton\'s law would imply, such that it becomes comparable to the other interactions at distances that will be testable in the soon future. The concrete scenario for this is that our world could have additional compactified extra dimensions. 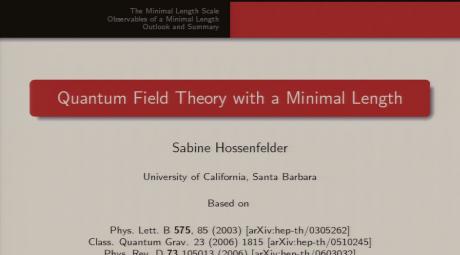 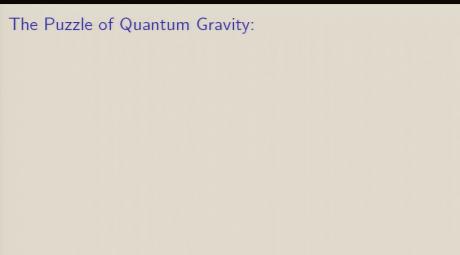 Sabine Hossenfelder Frankfurt Institute for Advanced Studies (FIAS)
December 13, 2005
The phenomenology of quantum gravity can be examined even though the underlying theory is not yet fully understood. Effective extensions of the standard model allow us to study specific features, such as the existence of extra dimensions or a minimal length scale. I will talk about some applications of this approach which can be used to make predictions for particle- and astrophysics, and fill in some blanks in the puzzle of quantum gravity. A central point of this investigations is the physics of black holes.