Xiao-Gang Wen received his Ph.D from Princeton University in 1987. Wen became a five-year member of IAS at Princeton in 1989 and joint MIT in 1991. Wen is a Cecil and Ida Green professor of Physics at MIT, and a Distinguished Moore Scholar at Caltech.

Wen's expertise is in condensed matter theory of strongly correlated electronic systems. He introduced the notion of topological order (1989) and quantum order (2002), to describe a new class of matter states. This opens up a new research direction in condensed matter physics. He found that states with topological order contain non-trivial boundary excitations and developed chiral Luttinger theory for the boundary states (1990). The boundary states can become ideal conduction channel which may leads to device application of topological phases. He proposed the simplest topological order -- Z2 topological order (1990), which turns out to be the topological order in the toric code. He also proposed a special class of topological order: non-Abelian quantum Hall states. They contain emergent particles with non-Abelian statistics which generalizes the well known Bose and Fermi statistics. Non-Abelian particles may allow us to perform fault tolerant quantum computations. With Levin, he found that string-net condensations can give rise to a large class of topological orders (2005). In particular, string-net condensation provides a unified origin of photons, electrons, and other elementary particles (2003). It unifies two fundamental phenomena: gauge interactions and Fermi statistics. He pointed out that topological order is nothing but the pattern of long range entanglements. This led to a notion of symmetry protected topological (SPT) order (short-range entangled states with symmetry) and its description by group cohomology of the symmetry group (2011). The notion of SPT order generalizes the notion of topological insulator to interacting cases. He also proposed the SU(2) gauge theory of high temperature superconductors (1996). 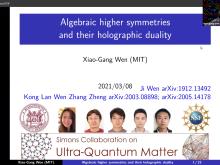 Symmetry as shadow of topological order 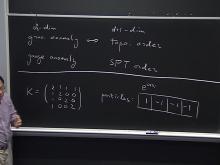 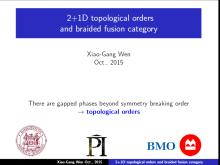 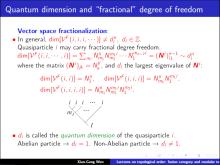 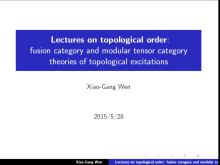 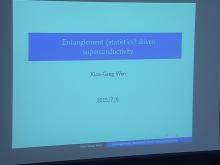 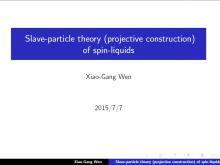 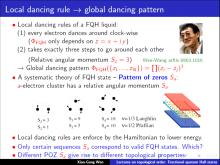 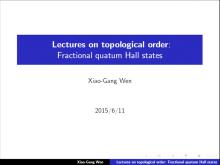 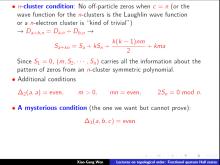