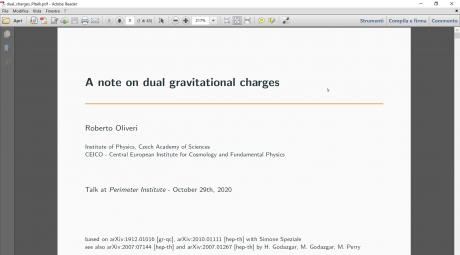 A note on dual gravitational charges

Roberto Olivieri Institute of Physics of the Czech Academy of Sciences
October 29, 2020

Dual gravitational charges (DGCs) have been originally computed in the first-order formalism by means of covariant phase space methods using tetrad variables. I show i) why DGCs do not arise using the metric variables and ii) how they can be set to zero by exploiting the freedom to add exact 3-forms to the symplectic potential.

Without exploiting that freedom, DGCs can be understood as Hamiltonian charges associated to the Kosmann variation. I then discuss the implications of this observation for asymptotic symmetries and comment about subleading contributions thereof. 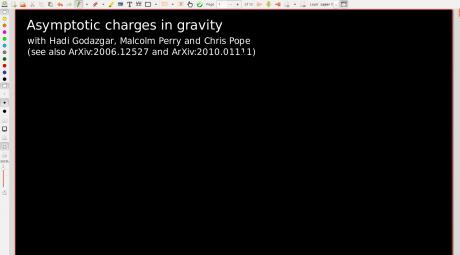 I will discuss the recent Hamiltonian derivation of dual BMS charges at null infinity using the first order formalism.  More generally, I will discuss how this idea can be used to classify asymptotic charges in gravity. 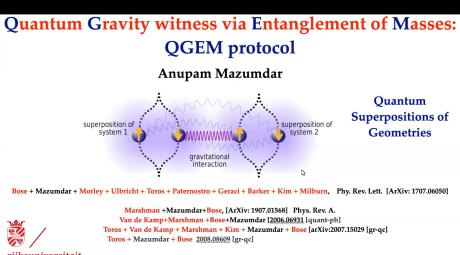 Understanding gravity in the framework of quantum mechanics is one of the great challenges in modern physics. Along this line, a prime question is to find whether gravity is a quantum entity subject to the rules of quantum mechanics. It is fair to say that there are no feasible ideas yet to test the quantum coherent behaviour of gravity directly in a laboratory experiment. Here, I will introduce an idea for such a test based on the principle that two objects cannot be entangled without a quantum mediator. 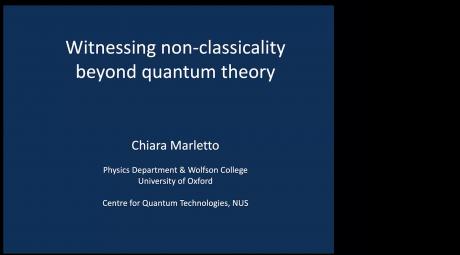 Witnesses of non-classicality beyond quantum theory

I discuss general argument to show that if a physical system can mediate locally the generation of entanglement between two quantum systems, then it itself must be non-classical. Remarkably, the argument does not assume any classical or quantum formalism to describe the mediating physical system: the result follows from general information-theoretic principles. This argument provides a robust and general theoretical basis for recently proposed tests of non-classicality in gravity, based on witnessing gravitationally-induced entanglement in quantum probes. 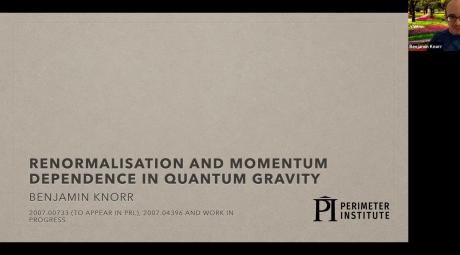 Renormalisation in curved spacetimes is an involved subject. In contrast to renormalisation in a flat spacetime, the standard momentum representation is not directly available. Nevertheless, the momentum dependence of correlation functions is crucial to deciding whether a theory is unitary and causal. I will discuss how to define a notion of momentum dependence in gravity on a fundamental level. With this at hand, one can discuss an important quantum field theory observable: scattering cross sections. 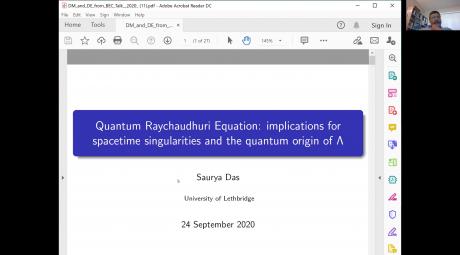 Quantum Raychaudhuri Equation: Implications for spacetime singularities and the quantum origin of Lambda

The Raychaudhuri equation predicts the convergence of geodesics and gives rise to the singularity theorems. The quantum Raychaudhuri equation (QRE), on the other hand, shows that quantal trajectories, the quantum equivalent of the geodesics, do not converge and are not associated with any singularity theorems. Furthermore, the QRE gives rise to the quantum corrected Friedmann equation. The quantum correction is dependent on the wavefunction of the perfect fluid whose pressure and density enter the Friedmann equation. 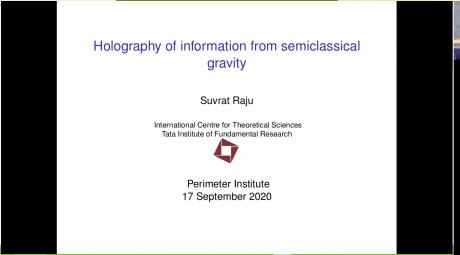 Holography of information from semiclassical gravity

We will argue that even with semiclassical gravity, it can be shown that a copy of  all the information on a Cauchy slice resides near the boundary of the slice. We will first demonstrate this in asymptotically global AdS, and then in four-dimensional asymptotically flat space. We will then describe a physical protocol that can be used to verify this property at low-energies and within perturbation theory. 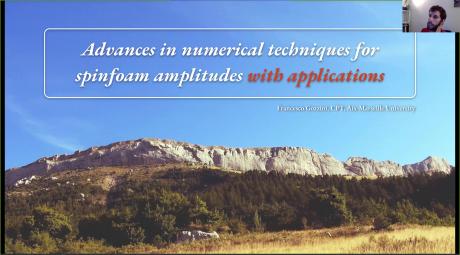 Advances in numerical techniques for spinfoam amplitudes with applications

The computation of transition amplitudes in Loop Quantum Gravity is still a hard task, especially without resorting to large-spins approximations. In Marseille we are actively developing a C library (sl2cfoam) to compute Lorentzian EPRL amplitudes with many vertices. We have already applied this tool to obtain interesting results in spinfoam cosmology and on the so-called flatness problem of spinfoam models. 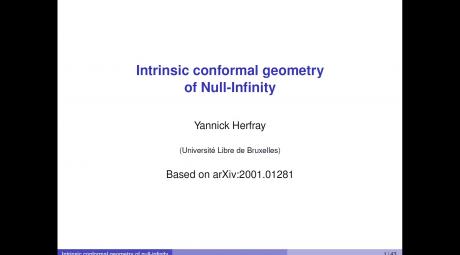 Since the seminal work of Penrose, it has been understood that conformal compactifications (or "asymptotic simplicity") is the geometrical framework underlying Bondi-Sachs' description of asymptotically flat space-times as an asymptotic expansion. From this point of view the asymptotic boundary, a.k.a "null-infinity", naturally is a conformal null (i.e degenerate) manifold. In particular, "Weyl rescaling" of null-infinity should be understood as gauge transformations. 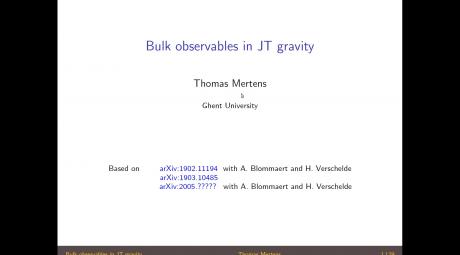 Using a definition of bulk diff-invariant observables, we go into the bulk of 2d Jackiw-Teitelboim gravity. By mapping the computation to a Schwarzian path integral, we study exact bulk correlation functions and discuss their physical implications. We describe how the black hole thermal atmosphere gets modified by quantum gravitational corrections. Finally, we will discuss how higher topological effects further modify the spectral density and detector response in the Unruh heat bath.